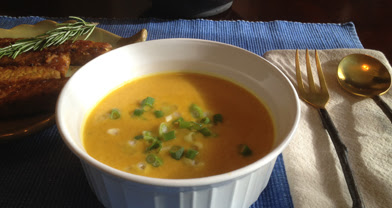 Try this favorite to take the chill off an autumn day.
Years ago, I found the recipe on a website called yumyum.com and decided to make a few adjustments to make it my own.
I like how simple this is to make and that it doesn't have the typical spices that we associate with pumpkin. No nutmeg or cinnamon in this recipe. I'm using pumpkin, but butternut squash is a nice choice, too.

To complete this meal, try the Citrus & Maple Glazed Tempeh.

As nice as this soup looks, it all went south right after I snapped this photo and I decided to blog about it. After all, we're all here to learn something and experience doesn't always make for perfection. I won't spoil it for you here, just read And then I broke it..., following the recipe. 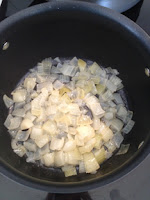 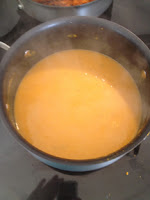 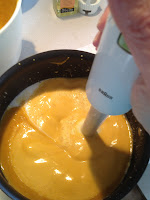 Directions:
Melt butter (or olive oil) in a large soup pot over medium-low heat.
Add the onion and cook, stirring occasionally, until onion softens, about 10 minutes.
Add the pumpkin and salt and continue to cook, 5 minutes.
Add the stock, coriander, curry, sage, bay leaf and pepper.
Cover, increase heat and bring to a boil. Immediately reduce heat to low and simmer 15 minutes.
Remove the bay leaf.Remove from heat and place in a food processor or blender and puree until smooth. Alternatively, you can use an immersion blender. Once blended, I like to strain the soup through a large sieve to remove any pieces that were missed in the process.

To the puree, add milk or cream and walnut oil. Stir until smooth and thick. Continue stirring and bring the temperature back up - do not boil.
Garnish with chives, a dollop of sour cream, or roasted pumpkin seeds. Serve piping hot.
Tips: If you substitute stock with broth, remember to taste it along the way. Since stock is made with spices and vegetables, this soup may taste bland and need more seasoning than the measurements I've provided.  I haven't found a substitute for walnut oil but I think I'll try flax seed oil.

I decided to lighten up the soup and save myself a trip to the store so I replaced the heavy cream with 1 cup of non-fat milk and 1 cup of non-fat, Greek yogurt. The first bowl was lovely. After photographing that first cup of soup, I realized that I had forgotten to turn off the stove and the rest of the soup was starting to boil. The fact that I was using non-fat dairy meant that it didn't stand a chance. The result was a pot of grainy, seemingly curdled, soup.
There's a fix though.

If you decided to make this recipe because of its easy rating, stay tuned. This is where 'easy' steps aside and science takes over. Before I return to the story, we ought to walk down memory lane to home economics class, when we had to re-create kitchen mishaps for the sole purpose of learning how to avoid them. The experiment that came to mind today was boiling cream sauce until it "breaks" (the milk proteins separate and coagulate or turn grainy). There are a few things that will cause dairy to break, high heat is one of them. Fat gives dairy products some resistance from breaking if the heat is too high.

First, the soup wasn't spoiled. It just looked odd. I removed the soup from the stove and let it cool while I quickly threw together a roux (butter and flour). I added the roux a little at a time while I whisked the soup and slowly brought the temperature back up without allowing it to boil. In about 15 minutes the soup, once destined for the garbage disposal, was smooth again and tasted great.