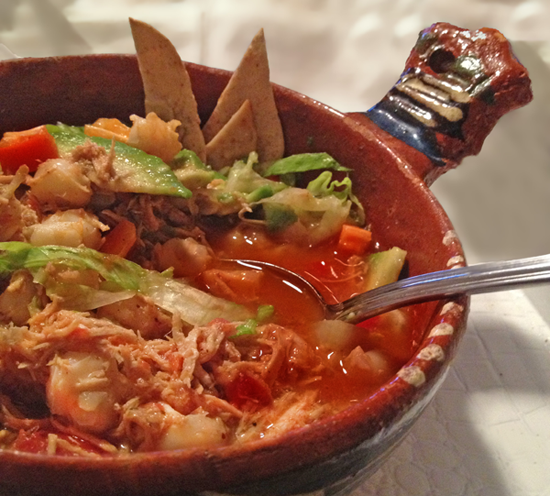 I hesitate to call this soup 'posole' because it's not made in the traditional Mexican way. There's no pork in this, I use canned hominy and tomatoes, even the broth can be commercial.
I like to make most dishes from scratch  but this one is so healthy that, I'd rather adapt the recipe by using organic foods from grocery store than eliminate it from the menu.
This is an easy recipe but it takes some time to do it exactly as I did. You can cut down the cooking time if you have cooked chicken on hand. So, even though this isn't traditional posole, it's hearty soup and a creative way to use leftovers. 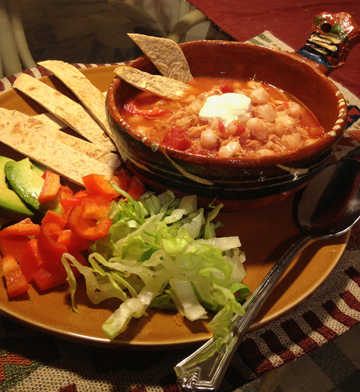 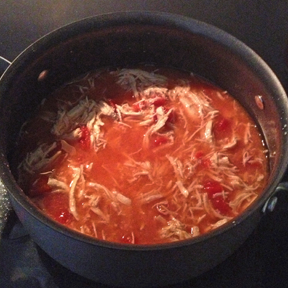 Combine broth, onion, chilies and spices in a large pot and heat until boiling. Reduce heat and simmer until the dried chilies are  soft (approx 15 minutes), remove and allow to cool. Open the chilies and remove the seeds. Put them back into the broth, cover and continue to simmer until the onion is completely softened (approximately 45 minutes). 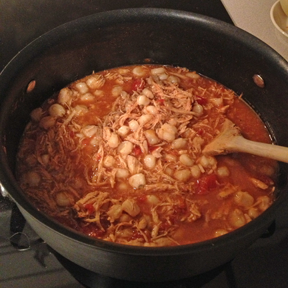 Remove the onions and chilies to a separate bowl to cool. Set aside.
Add the chicken, tomatoes, garlic and oregano to the broth and let it cook 1 hour.
In the meantime, puree the onion and the chili pepper. You can use a blender, food processor or, if the onions are good and soft, you can push them through a metal strainer or ricer. I keep the chili pepper separate so I can control the spiciness of the dish. Taste the broth. If you want more heat, you can puree the chili pepper and add it, a little at a time, until you're happy with the taste. When the chicken is cooked, shred (or dice) it and return it to the broth.  If you're using chicken that has already been cooked, add it at this point.

Add hominy, salt and lime juice. Heat until all ingredients are hot and serve immediately with garnishes.