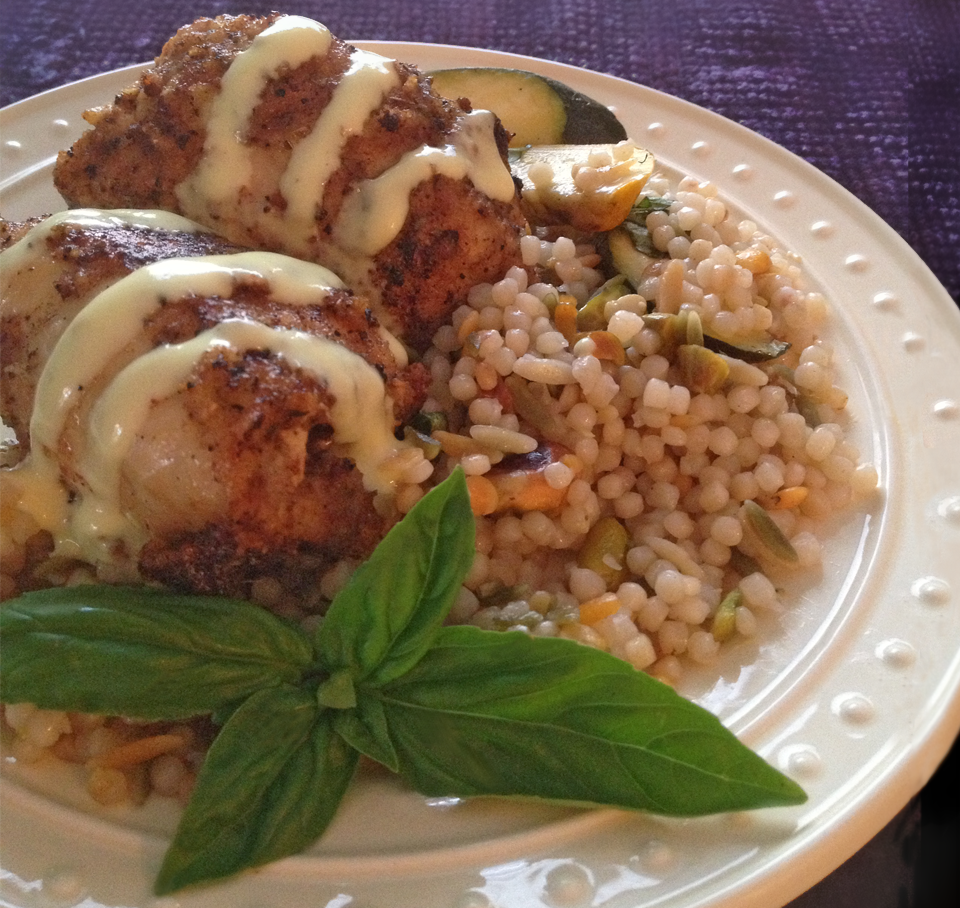 The first time I tasted this dish I was at a restaurant called Soloman Grundy's on the Berkeley Marina. I was just starting to take an interest in cooking and this was the first recipe I attempted that was outside of our family's southern Italian wheelhouse.

I'm guessing it was in the late '70's - or maybe the early '80's - well before the internet, so I took to the family collection of cook books and newspaper clippings until I found a recipe. I wish I could source it for you but that moment has passed. All that's left is the hand-written copy I made. It took a while to get it right, but it's easy to do.

The surprise of this dish, when cooked correctly, is the burst of butter that spills out when the chicken is sliced. After a few failed attempts, I learned that the key is to freeze the butter. Don't skip that step. The chef at Solomon Grundy's served it on a bed of rice with a cheese sauce that was delicious but difficult for me to recreate. Frankly, this dish doesn't need sauce and I've never had it served that way again.

As you can imagine, the butter keeps the chicken breast moist but a little sauce dresses up the presentation. If you're so inclined, the easy Hollandaise sauce recipe is included.

This is a hearty chicken dish that will take away the chill as Autumn sets in. I served it with a pearl couscous/lentil medley and grilled squash. 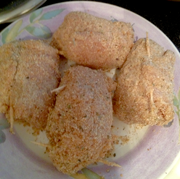 Pound chicken breasts to 1/4 inch thickness.
At the narrow end of the chicken breast, place the butter and a pinch of each of the oregano, parsley and garlic. 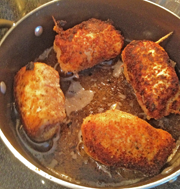 Fold the narrow end of the chicken breast over the butter and seasonings. Roll toward the wider end and fold the sides of the chicken inward as you go. Make sure the sides are closed. Tie each bundle with kitchen string or secure with toothpicks.

Roll each bundle in the egg mixture, then breadcrumbs.

Prepare the sauce by combining mayonnaise, mustard and milk in a small saucepan. Heat on low, stirring occasionally, while you cook the chicken.
In a deep frying pan, heat the oil until just starting to smoke.

Fry each bundle until all sides are golden brown. Drain on a piece of paper and keep warm until you're ready to serve. Remove the string (or toothpicks) before serving. Goes well with rice or couscous. Drizzle with sauce and serve hot.